The Magical Applications of the 36 Decansby Austin Coppock

The decans are a division of each of the 12 signs of the zodiac in to 3 equal parts.  To each of these 36 divisions is ascribed a wealth of imagery and meaning.  They add an admirable amount of detail when applied to the inspection of astrological charts, yet their historical use is not solely confined to prognostication.  The literature testifies strongly to a variety of magical applications.

Within these volumes, two primary types of operations are evident. The first use is as a type of image magic, wherein the image of a given decan is impressed into a fitting material, at an appropriate time, in order to produce a talisman.  The second use is as a set of gateways for calling forth, honoring or achieving union with a variety of spirits. 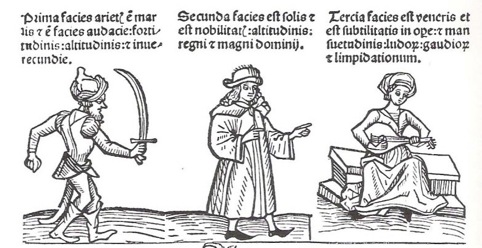 Though the decans originated as a calendrical device of the ancient Egyptians, much of the textual explication of their usage does not come until the Hellenistic and Greco-Roman periods.  During this period, the decans are often accompanied by lists of spirit names.  These lists include daimones, angels, demons, and gods from a variety of pantheons.  There are, however, few texts which provide the images which would later become the primary method of communicating the decans’ power and meaning. In the few cases where images are described, such as in those attributed to Teucer the Babylonian, the pictures are not those of  spirits or powers behind the decans, but are instead physiognomic images for those born under auspices of a particular decan.

This same practice of seeing the decans as host to a legion of spirits is resumed in the Golden Dawn’s synthesis of the decans with the infernal spirits of the Goetia, as well as the angels of the Shem-Ha-Mephoresh. 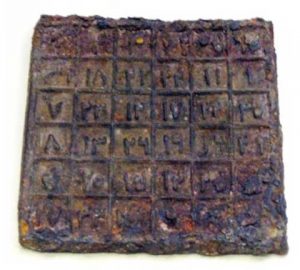 Though there is a wide divergence in the aforementioned texts and traditions, what is common is that the 36 divisions each indicate a particularly potent time for calling upon the power of a particular spirit.  Yet there is great disagreement about what manner of spirits the decans host.  Some texts claim that a legion of devils roosts within them, others angels, and still others gods or daimones.  Some sources, such as the Stobaeus fragments of the Corpus Hermeticum and the Mathesis of Firmicus Maternus, merely attest to a set of nameless but fearfully strong gods.

What can be gleaned is that the decans indicate divisions of both space and time which are of great value as gates, or doorways.  They are not beholden to any one type of spirit, but instead gates through which a great variety might pass.  It is important, though, to differentiate between a door and what passes through it.   Though a given door may provide access to a certain entity, that door has functions beyond those of the entity in question.  It is therefore necessary to understand not only what a given door allows access to, but also the nature of the door, as well as its attendants.  In this sense, the decans can be seen as grimoire of thresholds, a collection of 36 doorways and their guardians.

The nature of these gateways and their attendant intelligences is undoubtedly solar, for the decans themselves are birthed from the endlessly procreative relationship between the Earth and the Sun.

In this sense, the decans can be seen as a type of specialized zodiac, drawing their power from the Sun, rather in a sense parallel to the Lunar Mansions present in a variety of systems.  The inherently solar quality of the decans is attested to not only by their origins, but also their number- 36, a number long associated with the Sun.  In the sundry Kabbalistic frameworks, the Sun’s number is 6, and 36 is 6 multiplied by itself.  This is made particularly clear in the magic square of the Sun, which is a grid of 36 squares, 6 high and 6 wide, for a total of 36 squares.  The decans can thus be seen, together, as a grimoire or family of 36 spirits which describe subdivisions of the solar sphere.  Indeed, the 20th century planetary magician Franz Bardon described a host of 36 spirits which reside in the sphere of the Sun.  Yet as magicians have looked into this honeycomb of doorways, they have seen faces looking back at them.

In addition to providing access to pandaimonium of gods, angels, devils and daimons, the decans’ power has also been expressed solely through images- strange figures and  sometimes surreal scenery.

Beginning with the Yavanjataka in the 4th century C.E.  the meaning and power of these 36 faces was not spoken, but seen.  This tradition of mute images continues into the astrology and magic of the medieval caliphates and later into the castles and monasteries of Renaissance Europe.

In this plethora of images, it is not gods or spirits that are depicted.  Instead, the decanic images range from the strictly representational, “a maid spinning at her wheel” to the surreal and symbolic, “a decapitated man holding a peacock.”  These mysterious and often disturbing images are rarely accompanied by more than a line or two of explanatory text, and nowhere in these texts are names given to this set of 36 figures.

What is striking, though, is that in almost none of the texts are the decans abbreviated.  This is odd, considering that many of the texts in which they appear are replete with sigils and glyphs.   This refusal to abstract the images must thus be considered a conscious choice, and therefore to reveal something about the nature of the power one accesses through the decans.  Representation must therefore be regarded as essential to the decan’s power.

The most explicit directions on how to access the magical power of these images comes to us from the Picatrix.  The method, in brief, is to impress the image onto the appropriate material at a time when the proper planet activates a decan.  Thus the images, even without names or identities, were when properly graven considered to impress their meaning upon the real.

It is interesting to note that the two primary magical uses of the decans, as gateways and as images, are, in a sense, word and image.  During the history of their use, the images became separate from the names of the spirits attributed to them, and used separately.

This decay of the bond between word and image in decanic material is of especial interest when one considers their origins in ancient Egypt.  The first evidence for their use as having a form of magical power is in coffin texts around 2200 BCE.  The Egyptian language at that time was a purely hieroglyphic, with words all being represented by pictures.  Thus for the ancient Egyptian, it would be difficult, if not impossible, to separate word and image to the degree which occurs naturally in phonetic languages, such as English. 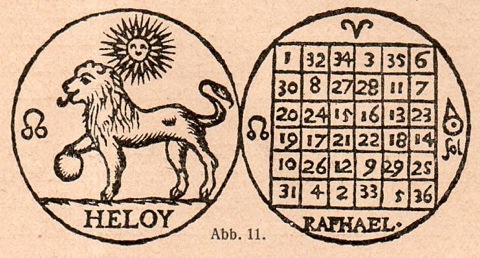 It is difficult not to wonder whether this inherent unity of word and image is not connected to the ancient Egyptians repute as the sorcerers par excellence of the ancient Mediterranean world.

This decoupling of image and word is something which many magical traditions seek to remedy.  It is essential to many systems to unite color, form and sound by use of essential tables of correspondence.  By these means, a variety of systems seeks to connect the media of different senses in order to create unified fields of meaning and power.  The eye sees, the ear hears, the hand shapes, and the voice speaks.

Even as the fracture between word and image calls forth shadows of their lost synthesis, the efficacy of the words and images by themselves testifies to the potency of even these fragments.

In summation, the study of the decans provides benefits not only for the astrologer, but for the practicing magician as well.  Behind these 36 doors of solar mystery, gods and spirit throng, awaiting contact.  The decans thus provide a complimentary structure for timing a variety of works of evocation, adoration and congress. In addition, the images are themselves offer an entire gallery of talismanic works, whose functions address virtually every facet of the human world. Beyond these utilities, study of the decans offer insights into the primordial divide between words and images, names and faces.