THREE HANDS PRESS. At a time where many painters are treating esoteric subject matter in an exoteric fashion, it’s refreshing to see the level of subtlety expressed in your work. Is this reflective of your approach to these matters in general, away from the easel?

My creative process indicates my personal values. I do appreciate subtlety, and believe that many things cannot be sufficiently understood without deep exploration. This requires no small patience, diligence and focus on the part of the querent. The time that I spend in the studio is devotional in much the same way that many people think of the temple or the church. In my experience, Art is simultaneously a meditation and an evocation. My hope is that my images reflect the same depth of intention that went into their creation.

No doubt the devotional atmosphere in your studio is assisted by its former incarnation as a place dedicated to monasticism. Does solitude and the cloister lend particular virtue in the creation of your work?

An aesthetically inspiring work environment definitely encourages creative focus. The building itself dates from the 1860’s, having been built at the height of the California Gold Rush, and has been little altered since that time. The anachronistic atmosphere further suits my endeavors. My window overlooks a Victorian rose garden, and across the street, corvids wheel and caw amongst the tall pines of a pioneer era cemetery.  I’ve always felt a secluded intimacy with my visions when ensconced in my cell-like Atelier. This sensation is undoubtedly fortified by the legacy of sanctity that dwells within the building’s consecrated walls.

Many aspects your work are evocative of differing historical eras, and seem to also be claiming new territory for symbolist art. What historical eras do you draw inspiration from in particular, and where does your knowledge of iconology originate? 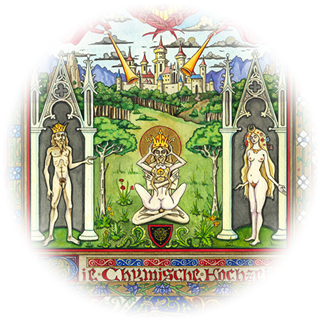 Many of my creations elaborate on timeless themes found throughout classical art history, specifically within the realm of painting. There’s a long tradition of image crafting extending back to ancient times, and therein lies a wellspring of inspiration for the inquisitive seeker. It is not enough to simply emulate tradition, new interpretations of the old forms are required in order to make the content relevant. My ambition is to provide some contemporary artistic continuity for these archaic forms. Fortunately I’m not alone in this pursuit, and there are many remarkable artists today who share my appreciation for the rich legacy of what has come before.

The specific era which most directly influences my work is the early Renaissance, especially in northern Europe and in Italy. The artistic merits of this period were also recognized during the romantic era of painting, which saw the blossoming of the Nazarene movement in 19th century Germany. This group of painters endeavored to resurrect the craft of painting as a catalyst for spiritual development, and as a means of preserving timeless values amidst the rapidly accelerating force of industrialism. By using 15th century compositional structures and painting techniques, the Brotherhood of St Luke, as they called themselves, re-interpreted the aesthetics of the past to reflect the present. Their efforts in turn inspired the Pre-Raphaelites in England some time later, and after them the Symbolists all over Europe. Even the Surrealists and the Expressionists owe something to these cultural pioneers. It is this tradition of referential innovation that nourishes my work.

Of course, painting has never stopped evolving and every era has had something uniquely valuable to offer. Another greatly inspiring era is the early baroque, wherein the naturalist tenebrism of Caravaggio usurped the existing Mannerist conventions. The 17th century also provides us with the Dutch Masters, who refined the Vanitas and Memento Mori themes to perfection. Through intimately obsessive rendering, the tangible becomes the spiritual and vice-versa.

With regard to symbol and allegory, it seems that, stylistically, your images are subject to the impress of what we would think of as early renaissance occultism, but which was then considered Natural Magic.

Yes, a salient observation. There is the temptation to view some of the iconography of the period as naive, but the suggestive nuance of various subjects is often richer and more complex than is often credited. My illustrative style takes cues from the illuminations of medieval manuscripts, as well as from baroque alchemical and zodiacal imagery. I’m intimately familiar with astrological symbolism, and spent a number of years visually interpreting peoples horoscopes. I endeavored to depict the complex dynamics of the natal chart via mythological and allegorical references. To assist me in this work, I looked for parallel symbols in different cultures, striving to elaborate on traditional archetypes with unique variations.

You work in a variety of media, including oil and egg tempera, which is seldom seen these days. Can you tell us a bit more about the medium and how you came to work with it?

The early Renaissance was a remarkable period and saw the development of the misch painting technique that I use, wherein the crisp opacity of egg tempera is combined with the resonant subtlety of oil paints. The process is chemically delicate and requires careful application. I studied this method in Europe some years ago, and use it for creating the majority of my painted images. Through meticulously applied glazes, an unrivaled radiance of color and form can be coaxed from a 2 dimensional plane. The delicately crafted compositions of this era also speak of a poignant balance between the material and the spiritual that has been largely silenced by the cacophonous barrage of modern media. Nevertheless, the arcane voices of that time still speak if one has the will to listen.

Your work has appeared on Robert Bartlett’s alchemical texts and more recently in the first English translation of Jocus Severus by Count Michael Maier (Ouroboros Press, 2011). Do you feel that your work is especially suited to Hermetica, and Alchemy in particular?

The emblematic compositions of historical alchemical illustrations have always had a strong appeal. I resonate with the symbolic nuances of color and composition found in arcane images. Authenticity is always a priority, but the goal is to reflect something unique when recreating ancient forms. It’s indeed been an honor to have had the opportunity to reinterpret some of these timeless themes, and my hope is I have done the subjects justice. I regard my work as a continuum in a long tradition of visionary illustration. The artist is not unlike Hermes himself; a psychopomp between realms, mitigating between the visceral and the mundane.

A number of your images are used in Daniel Schulke’s forthcoming book Veneficium,including the haunting ‘Sacred Heart’ which is also being offered as a limited edition print. What’s the genesis of this image? 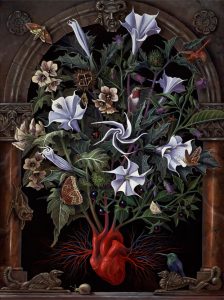 The Sacred Heart painting may in fact be my most ambitious work to date. Not only in terms of technique, but also as a synthesis of many complex thoughts and feelings. As mentioned, process is extremely important when I create an image. The work ultimately facilities a journey for both the creator and the viewer, taking one through various stages of initiation. The destination is not always known until one arrives.

The aesthetic of the composition is inspired by baroque-era dutch botanical displays, most specifically the masterworks by Van Huysum, and Ruysch, wherein several types of plants are grouped in idealized bouquets, often crawling with insects and small animals. The meticulous hyper-realistic rendering of flora and fauna expresses the profound beauty of the macrocosm through adoration of the microcosm.

The Sacred Heart painting makes use of this traditional still-life genre and integrates it with a theme from catholic mysticism, wherein the Sacred Heart of the Savior erupts in radiant life and divine love. The three plants growing from the aortal chamber are Atropa belladonna, Datura stramonium, &Hyoscyamus niger, three psychotropic and highly toxic species, which have particular significance in folklore and legend.

This is somewhat evocative of the ‘cardiognosis’ of the Christian mystics, the ‘knowledge of the heart’ that relates to an inner and sustaining origin of mystical spiritual experience.

The cyclical function of the heart is relevant here, pumping life in and out through its undulating rhythm. My intention was to elaborate on the expiating function of the Sacred Heart devotion; the assimilation of baneful poisons is catalyzed by passion and manifests as visionary power. The Heart is a crucible wherein the transformation takes place. The outpouring of virtue and venom sustains a diverse menagerie of small creatures. There are 13 individual species represented amongst the foliage and flowers. Their activities and interactions speak of the complex web of life that sustains them all, the Sacred Heart at the center.

At its core, this work is about the dynamic relationships that exist between flora and fauna, color and form, spirit and matter. The viewer is encouraged to enter into this beguiling realm to experience their own catharsis.

Are you working on further projects for Three Hands Press?

There are quite a few irons in the forge that will take some time to develop. The furnace must be diligently tended to before the contents of the crucible will be revealed. Suffice to say that the creative fires are burning hot and fierce!