We extend thanks to all in our community who turned out for the official book launch for Joseph Uccello’s OCCLITH 0: Omniform last night. We were thrilled to have such a splendid crowd, and wish Joseph every success with his book. In the arcane traditions of the alchemist Paracelsus, the Aqua Angelis provided a celebratory tincture for elevating the event, and the book reading and signing was a delight. Three Hands Press extends a special thanks to Patricia Cram, Alan Sable, Kaitlin Reeves, and the good people of the Legionnaire Saloon for bringing their own impeccable brands of finesse to this event. Future events are in the planning stages, to be announced soon on this website.

Standard hardcover copies the first English translation of the of Salmonic Magical Arts, two eighteenth century Swedish books of black arts, will be arriving at out facilities on August 19, at which time shipping of standard editions will commence. In support of the book’s release, translator and author Fredrik Eytzinger will be speaking at the fifth annual Esoteric Book Conference in Seattle September 14 and 15, in a presentation concerning the Svartkonstböcker tradition of sorcery books in Sweden. Three Hands Press welcomes him to North America and the premiere esoteric book event. Fredrik recently presented his paper ‘Occult Medicine in the Printed and Verbal Traditions of Scandinavia’ at the ESSWE conference in Gothenburg on June 27. 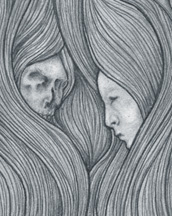 Three Hands Press warmly welcomes Peter Hamilton-Giles to our esteemed family of authors. His first book for Three Hands Press, The Afflicted Mirror, will be published at Autumnal Equinox this year, and details for purchase will soon be provided on this website. We also extend our enthusiastic welcome to occult artist Carolyn Hamilton-Giles, whose haunting and distorientating artwork will appear both in The Afflicted Mirror and a special letterpress print art offering soon to be announced. We look forward to working with Peter and Carolyn on many exciting projects in the future.

Idolatry Restor’d, having been delayed due to custom paper availability, is back on press and should begin arriving mid-September. We apologize for the delay and guarantee the wait will be worth it. More titles will soon be announced via our private subscriber list: those who have not signed up yet are encouraged to do so in order to receive advance notice on new works, rare editions, and other offers available only from the Publisher.