Books of Black Arts & their Legacy

An Interview with Fredrik Eytzinger

What, in essence is a ‘Book of Black Arts’ in the Scandinavian, and more specifically Swedish magical traditions?

The Book of the Black Arts was commonly a privately-owned spellbook or gathering of cunning advices belonging to a single person, but as we can see in the case of Salomonic Magical Arts, it could also be a manuscript added to by several individuals passed down for several generations.  There are also cases when common people in the old times have referred to printed books as being Books of the Black Arts, such as Den Afslöjande naturen (The Revealing Nature) by Henrik von Gerstenbergk, issued in the late 19th century. 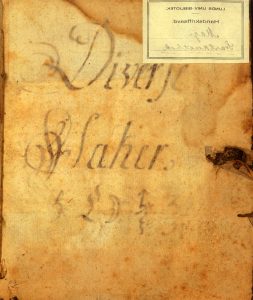 What types of people owned these books?

Since the books in most cases were not intended for publication and instead belonged to a wise person as a part of his or her private practice, they were believed to have been used by a limited number of cunning people. When these books, and other books of similar content, were issued in print they reached a wider audience. There also used to be a great interest in occult and magical subjects among the bourgeoisie in Sweden, connected to freemasonry and the royal house. So on one hand we have the cunning country people employing the books in their personal practice, while a growing interest in these affairs also took form among the upper class.

How did you come to study Salomonic Magical Arts, and what were your reasons for translating it?

When I was studying the Swedish folk magical tradition I realized that there were not actually that many first hand sources available in English that could be defined as Books of the Black Arts or Black Books. At the time when I started investigating the subject I could only think of only a handful. My attention was then drawn to Salomonic Magical Arts because of its very interesting origin, and due to its wide subject matter I felt it would be an important addition to the international study of esoteric and occult subjects. The manuscript covers many different subjects, such as renaissance magic, folklore & folk magic, herbalism, diabolism, spellworkings, healing magic etc. It is also a very intriguing part of Sweden’s history.

Some modern occultists have criticized such historical collections of magic as being ‘outdated’. In what ways are the Black Books relevant to the scholars and practitioners of today?

I do not believe that ideas of magic or the history of magic can be outdated at all. Cultural expressions are transformed and we change our concept of the world continuously, and these kinds of texts will of course have to be released from their context in order for the average reader to establish a transmission with some kind of essence connected to its origin, without letting it become the subject of relativism.

From an orthodox view on practice, I think I can understand how some might consider it outdated, but magic is not orthodox in the same sense as religion can be. A universal language of occult symbols is present in these manuscripts, which is of interest both from the perspective of myth and actual practice. For the scholar this is a quite unique account of a rural practice and would attract scholars of esotericism, religion, history, ethnology, Scandinavian studies and medicinal history.

One major point in the modern study of folk magic is that the practice we define as folk magic should not exist as an exotic idea originating in a time separated from ours. In addition to this I do not believe that the distinction between folk magic and other forms of magic is as clean cut as many would suggest. My approach is more involved with searching for the underlying primal influences which affects magical evolution, incorporating the development of all forms of magic.

In occult press there are often attempts to classify folk magic as ‘pagan’ or ‘christian’, or polemics that try to make these categories mutually exclusive. Svartkonstböcker such as Salomonic Magical Arts contain magic that includes both Christian and non-Christian concepts, frequently blurring the boundaries of such definitions. Do you see these as an actual dichotomy, and is it likely that the compilers of Black Books did?

Yes and no. When studying magic from an historical point of view, and all other historical fields, I think it is important not to view the practitioners of the time as being passive subjects. They were of course a part of a Christian tradition, a local magical tradition and maybe even a family tradition, and they carried on the remnants of pagan practice, either knowingly or unknowingly, but they were also individuals who created their own individual concepts of the world. The practitioners of old times did not even define their practice as having to do with magic, even though we would say today that it did. I am not really interested in the dichotomy between pagan and Christian; rather I think it is a matter of modern conceptions. The Swedish folk magical tradition is not a unified practice; however we can of course note personal preferences if we get involved in case studies. Salomonic Magical Arts was written and compiled by a priest, and it encompasses both Christian prayers and conjurations of infernal spirits. I do not believe that there existed a well-defined dichotomy between different currents or traditions as we see it today.

I think a good comparison would be the present day ATR religions were different traditions and elements are incorporated into a quite flexible practice. However, I have addressed Salomonic Magical Arts as an account of magic, not religion. But that could be another interesting aspect to investigate.

What are some of the more interesting ‘pre-Christian’ concepts evident in the spells and rituals of Salomonic Magical Arts?

I think the tradition of employing the Rowan Tree in magic in connection to the pagan God Thor is quite interesting. Sometimes Rowan twigs should be gathered on Thursdays, or the Maundy Thursday to be more specific, which is the day traditionally attributed to Thor. Also, both the verbal magic and the sigils in Salomonic Magical Artsare to some extent quite similar to the pre-Christian practice, as for example the Merseburg Incantations and the staves used in Icelandic magic.

From an ethnological perspective, what can be surmised about the relationship to the spirit world of the user of Books of Black Arts?

I think what unites the folk magical tradition in Sweden is its close relationship with healing magic, and the majority of the wise folks performed some kind of healing magic assisting the local village in times of need. But there were of course those who served with both hands. Through this practice there is definitely a well-defined relationship with both God and the spirit world. In general there are for example many magical diseases that were inflicted by spirits, and the spirit world was very much present in the daily mundane practice and many spells in the Books of the Black Arts have been employed for protection against malevolent spirits. There are many aspects of the relationship to the spirit world in folk magic that are not addressed in the Books of the Black Arts. They have rather been passed down by oral tradition and can be found in personal accounts and interviews. Of course not all of the wise folks could write, and had no interest in writing it down, so the books we have today are quite unique in that sense.