An Interview With Artist Liv Rainey-Smith

Your images are a substantial component of Robert Fitzgerald’s new book Arcanum Bestiarum, which features over fifty original woodblock prints specially created for the work. However, before this publication, a considerable number of your images in your repertoire featured animals, theriomorphs, and fantastic creatures. Does the zoömorph hold a particular fascination for you?

I find animals in general simultaneously more approachable and more ineffable than humans. We ascribe species with sets of characteristics and meaning, yet ultimately we don’t necessarily grasp what lies behind their eyes. We like to think we’ve tamed the world around us, but fauna is never entirely predictable or safe. We envy the power of creatures which can fly, breathe underwater, hunt without weapons, and thrive in climates we can’t survive without our creations. We grow and learn from animal characteristics both real and imagined: stuffed animals are our companions and confidants in childhood, and pets bring us happiness, safety, and aid.

Altering the human form to include outward animal characteristics provides a symbolic baseline from which to respond to the figure. Wings in particular are nearly universal shorthand for spirits or gods. Add fluffy light bird’s wings to just about anything and most people will call it an angel. Add dark bat wings instead, and suddenly you have a demon, at least in the eyes of the beholder. Animal forms provide us with an incredible visual language to tap into and utilize.

What were some of the challenges in creating images for this new work?

The primary challenge was the sheer quantity of potential visual and didactic characteristics for any given creature. I’m quite fond of learning and enjoy variety, so I don’t have a single strong background I fall back on. Stylistically I do tend to be rooted in the woodcut illustrations of the 15th -17th centuries, but I’ll just as happily spend time reading about Aztec beliefs and practices as Egyptian, Greek, or Babylonian to name a few. It would be easy get lost in perpetual research and never produce anything beyond a more enriched imagination. 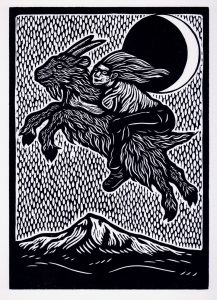 Having deadlines to work with helped keep this tendency in check as did a personal goal of keeping my work true to the bestiary tradition while giving it a renewed life. If Three Hands Press had simply wanted copies of old animal woodcuts, there would be no need to work with a living artist. I was, and still am, honored to have the opportunity to make a new contribution to such a longstanding book tradition. Historic work has its charms but the formulae and design conventions it follows are well known. I worked throughout the project with an eye towards retaining that lively old charm while updating it with both  different symbolism and new perspective. The Pelican in particular would be a good example of deeply traditional imagery given a new perspective.  The act of tearing its breast to draw blood is most commonly depicted, yet design conventions typically turned it into a rough generic bird with little resemblance to the real form of a pelican. I wanted my Pelican to be both more true in natural form, and more intimate. Its act of self-sacrifice fills the image and confronts you with its mixture of tenderness and violence.

Are the tools, materials, and techniques used in your work particularly suited to rendering animal forms?

Xylographia is particularly suited to me, though not necessarily specially related to animal forms. It is an artistic “home” I’ve been seeking throughout my life. Creatures, zoomorphic and not, have consistently asserted themselves in my work no matter what medium I’ve been engaged in at the time. Woodcut does provide certain challenges to rendering living forms. It can both resist and aid mark-making. Wood grain can throw the tool off your intended course, the result of which can be vexing or delighting. Marks from the same tool can vary wildly in size and character depending on the depth of the cut — which while often quite controlled can vary suddenly in a harder or softer patch of wood. Patterning of mark-making does lend itself nicely to fur, scale, and feather. It is particularly interesting to me to experiment with levels of abstraction. A certain uniformity is satisfying, but I often incorporate stylized “flat” areas with more naturalistic renderings to create tension.

Which images in particular were the most potent for you as an artist, both in terms of their emergence and their final manifestation?

All of my work has a distinct life and personality which may or may not show through the finished work, but I experience it directly in every piece. Woodcut is a time- consuming and transformative process. Each finished image has gone through multiple stages and iterations as it grows from concept, to sketch, to refined sketch, to rough carving, to proof, to final carving, and ultimate printing. Due to the nature of the relief process, each print is actually a mirror of the block and I have to learn the quirks of every block in order to coax the finished image from it.

Of all the works created for Arcanum Bestiarum, the frontispiece was the most hypnotically intense image to work on. It was a very seductive form and the temptation to keep producing variations was strong. I still want to continue making multi-winged angels beyond just the one. Physically, wood doesn’t tend to welcome rotational carving, so the act of carving the background was more effort consuming than my usual chipped background.

I was surprised by how much I enjoyed working on the insects and arachnids. Growing up in a desert region well-populated by ants, spiders, and scorpions all bearing painful venom didn’t make me particularly enamored of such creatures. I had a healthy respect for them, but preferred to avoid contact with them. When I started researching them in order to be able to render their forms, I was startled by how beautiful they could be once I checked my visceral fear response. Hard carapaces, delicate wings, and segmented legs offered an interesting break from fur and feather.

The Rat is the most personal of all the beasts included. I’ve kept rats or mice as companions for nearly two decades now, and enjoy interacting with them daily. On an individual level they can be intelligent, personable, and complex creatures. In numbers, they have a well-earned malign reputation as bringers of illness and consumers /spoilers of food supplies. Really, they’re quite like people, there’s a grand difference between the individual and the horde.

Arcanum Bestiarum is modern bestiary, but one which draws more from occult and magical traditions than from religious ones. What particular areas of the occult or magical practice have personal relevance to you, and have you drawn upon these for your animal images?

As a Thelemite, “Do what thou wilt shall be the whole of the Law,” is key to my practice as an artist. My artistic practices are my true magickal practices. Anything else, daily ritual, seasonal ritual, hermetic explorations, recording of nightly dreams, is all just refinement which contributes to greater work. The Sphinx in particular is very based on my own understanding and relationship to the powers of the Sphinx. The Bull imagery is based in Goetic working.

Since the book was announced, images from its pages have been exhibited at a number of galleries and fine art events. What kind of reception have your animal prints received?

Showings have been limited ahead of the book release to keep the art fresh for readers, but the response has been quite positive. Mind you, people tend not to be overly critical right in front of the artist so I don’t have any illusions I’ve received a completely genuine response from everyone I’ve spoken to. But people do allow their excitement to show through when an artwork resonates with them, and I’ve seen it happen with many of the different beasts. It is satisfying to see the prints strike a nerve. I know how it feels to receive a visceral jolt from an encounter with art, and it is an honor to be part of providing that experience to others.

While I don’t expect any individual to completely relate to the symbolism of every creature in the Arcanum, it is my hope that anyone regardless of their background will find worthwhile imagery within the greater body of work.

Those who follow your work with Three Hands Press will also want to know more about other projects you have done with other publishers. Where else can your work be seen, and what other subjects have you addressed with your images?

I have mostly worked as an independent printmaker creating small editions at will. My first couple years outside of school were very much about exploring the woodcut medium as well as finding a direction to focus on. Pieces produced in that time tend to be very historic style and creature-based, though I did a more abstract exploration of the iunges from the Chaldean Oracles. Many of the iunges pieces are color reduction prints, a method I’ve not used recently.

Based on my longstanding enjoyment of the tales of H.P. Lovecraft I typically revisit his stories and create new work based on them at least once a year. Currently I’m working on several Mythos woodcuts in vastly different styles for the “Starry Wisdom Library” anthology upcoming from PS Publishing. I’m also about to begin a special limited edition print just for the H.P. Lovecraft Film Festival. The process of creating this particular print will be shared online as I take it from sketch to finished print.

I’m also contemplating some new esoteric projects and will be taking some time in the coming months to develop those ideas and structure a plan for another large body of work. Arcanum Bestiarum has been my largest series of work to date, and I’m eager to challenge myself with another project of similar scope.

I show my original prints in galleries and during events as opportunity permits and also offer my print editions via my website which will be undergoing a re-design to improve its organization and function shortly. I also post regular updates on my Facebook art page. This year’s current show schedule includes dates in Portland, Oregon, Seattle, Philadelphia, and Providence.